Alaska’s Noatak River: A Month of Near Misses

Posted on October 7, 2022 by Alan Kesselheim

To begin with, that all ten of us, and our literal ton of gear, made it to Kotzebue, Alaska at the same time and in good shape is a small miracle. Arriving from Montana, Washington, Arizona, Texas, each coping with long drives, airport snafus, elderly parents at death’s door, monstrous and unwieldy baggage, everyone coalesced at the correct gate in the Anchorage airport to board the final leg to the edge of wilderness near the Arctic Circle. It is also a statement of the times that not one of us came down with Covid on the eve of departure, an eventuality that seemed entirely likely, and that would have thrown plans into a state of turmoil.

On the ground the next morning, ready to fly in to the gravel bar on the high reaches of the Noatak, inside the Gates of the Arctic National Park, weather looked decidedly iffy. Rain in town, clouds down to the deck. But the bush pilots bustled around getting us ready, weighing everything, arranging planes. I was skeptical enough that I didn’t change into my trip clothes until they started loading gear into planes. Sure enough, off we flew into the gray skies, flying low enough to look for wildlife up the Kobuk River, up the Ambler drainage, over high mountain passes so close to the ground it seemed like we could have handed an energy bar off to a hiker. Finally, into the broad valley of the Noatak, bounded by rugged peaks, and bouncing down a rough gravel bar where the weather was actually pretty sweet.

“It’s a different world up here,” the pilot said. He got that right.

That sweet window of weather lasted for an afternoon. Long enough for us to fabricate our folding canoes, get camp set up, and enjoy the surroundings. Organizing our gear on the gravel bar, we discovered the careless treatment of our baggage by airport TSA – bags of dried food opened and not properly reclosed, an essential piece of one of the folding canoes misplaced, baggage that we had carefully sealed up left undone . . . another dodged bullet.

That night it started to rain. It rained, off and on, for the next 15 days. We hoped to linger in the most accessible high mountains for the first part of the trip, and we did, but wet weather limited our views of the jagged peaks to fleeting glimpses. Our gravel bar dwindled to the point that we had to abandon camp. On our second morning Lee Lantzen’s tent was surrounded by a moat of rising river and the teepee tent had a stream running through the middle of it. If our flight in had been delayed by a day, who knows when we would have gotten in, or where they would have found a place to land, because our landing zone was under water.

It didn’t rain constantly. We were usually able to find windows in the weather to break camp and set up camp. Everyone was adequately equipped and competent enough to stay dry and warm, but hikes were rubber boot and rain gear affairs, hopping through miles of tussocks to reach low, cloud-shrouded ridges and slopes, sweating from the inside and leaking from the outside. Once or twice we got hammered by pelting storms in the boats, or mistimed breaking camp so that everything got packed away soaked and gritty. Layers of long underwear and bulky puff coats were the standard ensemble. Mega-mids and the teepee tent were essential shelters for cook groups. Zippers kept getting more and more gritty. Most days, tents went up wet and came down wet.

No one wanted to be the weak link when it came to attitude, so while we each had our internal dialog that want something like, “Holy shit, is this the weather we’re going to have for a month?!”, nobody said it out loud. Everyone bucked up, made the best of it, kept the humor going. During breaks in the rain we walked to high points to take in the vast tapestry of arctic land going into a mosaic of fall color. Paddling the long bends of river, ridges and valleys, high peaks and side canyons spread to the horizon, truly immense country on a scale that allows wildlife to live as they are meant to live. Mile after mile of wild terrain, each view full of hidden gems – lakes, canyons, pingos, rocky cliffs, broad tundra expanses, side streams full of evocative promises of what’s around the bend.

Days slid by like the bends of river, then weeks. Every boat had at least one set of binoculars and we ticked off a satisfying list of wildlife sightings – a handful of musk ox, dozens of Dall sheep, regular sightings of wolves, small herds of caribou, and more grizzly than anyone wanted to see. Every shoreline we stopped at, whether for lunch, a hike, or to camp, was adorned with fresh tracks of the big bears. We saw maybe a dozen of them, beautiful and scary, and several were more pushy than was comfortable about being near camp. More than once we woke to find fresh tracks within a few yards of our tents. Both Marypat and I adopted a form of bear-fear denial based on the assumption that no bear was going to mess with a group of ten people. Seemed to work, whether or not the theory holds water.

The Noatak kept rising with all the rain during the first half of the trip. For several days the river was the consistency  and color of wet clay, whispering against the boat bottoms as we paddled. It is a remarkable river. It flows more than 400 miles from the high peaks to the ocean, and has not a single portage, essentially no rapids of consequence, but maintains a steady current that allowed us to knock off 25-30 miles in an easy day. Along the way it covers a span of geography from jagged high peaks to broad tundra plains to boreal forest. Salmon jumped up river much of the month. Anglers in the group pulled out Dolly Varden, grayling, and salmon to add to our diet. On one of the few clear nights we all got to witness a stunning display of northern lights – green and pink and white sheets roiling through the cold sky.

As we left the high peaks in our wakes, the weather settled into a more reasonable pattern, still often gray, but not as consistently wet. On several days we enjoyed brilliant sun that brought out the true beauty of boreal fall (“All the colors of New England, only six inches tall,” noted Lee James). We settled into the rhythm as a group as well. Days off to hike and fish and enjoy camp. Making rounds of bannack bread over fires. Playing cards after dinner in the teepee tent. An occasional round of yoga-stretches before getting into the boats. Bend after bend of country unfurling as the river grew, braiding through miles of gravel bar.

Gyrfalcon and peregrine calling from cliffs. The slap of jumping salmon punctuating the long nights. A hike to a high bank above the Grand Canyon of the Noatak into a rustling grove of poplar, a sanctuary grove if ever there was one. The night, after weeks of gray, when a cold front swooped in, sweeping the sky clean and bathing the valley in tawny, lambent light. The feel of untethered river bearing our boats along. Fragments that stick fast in my memory.

As much as 150 miles upstream of the village of Noatak we started seeing native people in motor boats, coming upriver to hunt caribou and be on the land. At first it seemed like an intrusion, but they are part of this landscape, and they were out getting food for the winter. It is part of the scene. We had several nice conversations with people who stopped to share stories, give us smoked salmon or beluga, or share “Eskimo ice cream” made from caribou fat and berries (surprisingly delicious).

On the morning of Day 33, in mid-September, we pulled into shore near the airstrip in Noatak, hoping our bush flight would show up to take us out to ‘Kotz’. Locals immediately came around to help us ferry gear from the river to the edge of the strip. Our flight kept being delayed, or being put in doubt, by bad weather conditions where the pilots were coming from, so we had an entire day to spend in town or waiting along the gravel strip. “Welcome to Noatak!” residents kept saying. Regular visitors swung by on four-wheelers to visit, tell stories, show us carvings. One woman brought us fresh-baked scones.

Finally, as evening approached, our pilots were able to get in, and we flew over the final miles of winding river and coastal plane, and then across the short ocean stretch between the mouth of the Noatak and the town of Kotzebue. The next evening, after a day touring the tiny northern outpost, we caught our scheduled flight back to Anchorage and on to points south.

Good thing, because the morning after our escape, a Pacific typhoon hit that section of Alaskan coastline with 100 mile winds and a ten-foot storm surge. If we hadn’t made our flight, who knows when we would have gotten out? 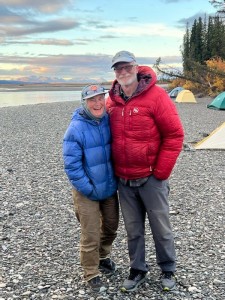