Posted on November 4, 2022 by Alan Kesselheim

Less than a month after we returned from our Alaskan adventure, we left home again, this time for Peru. I’m not much of a world traveler, but our family friend Liz has been working in Peru this past year on a Fulbright Scholarship. Sawyer spent a morning with us on the computer and was able to finagle three round trip tickets to Lima for something like a total of $200 using credit card miles and the like. Liz’s time in Peru is winding up in a couple of months, and her invitation to come and see the country was compelling.

So, in mid-October, off we went. It was a little complicated. Ruby decided to join us, and was traveling separately. The deal we were able to work out through Sawyer was a tad convoluted – our tickets involved us driving to Seattle, flying to Washington DC where we would endure a 7 hour layover, then flying to Bogota and on to Lima. Then, after a day in Lima, another flight on to see Liz in the northern highland city of Chachapoyas.

We talked ourselves into this gambit because Sawyer had friends in Seattle he wanted to visit before we left. We decided we could use the DC layover to take public transport and visit the Washington Mall. Blah, blah, blah. Anyway, from afar it all seemed plausible, if a bit challenging.

Now we’re back and everything has settled back down to its normal routine. And I’ve had a chance to ruminate on our journey and reach some conclusions. Two of them, in fact, that affirm attitudinal leanings I’ve harbored for a while now. They are no longer ‘leanings’. They are now firm beliefs.

First, that modern air travel is an absolute shitshow. This is particularly true, if you, like me, have a long enough arc to remember how chill and pleasant air travel once was. Back when you could stroll with your companion to the gate and see them off, and come to the gate and wave a welcome when they returned. Back when invasive, humiliating searches weren’t the status quo. Back when you actually conferred with humans to negotiate travel plans rather then computer screens demanding login information.Back when you actually got meals on flights rather than tiny packets of dry pretzels.

Everything, these days, is complicated, onerous, uncomfortable, and stressful. Even when things go according to plan, we are subjected to snaking long lines while the clock ticks down toward our departure time, obnoxious searches of our luggage and person, demanding computer kiosks, crowded and uncomfortable seating from waiting areas to plane seats . . . you get the picture. We’ve all been there. And that’s when things go well.

When things don’t go well. . . In our case the layover in DC went more or less according to plan. We figured out public transport and spent a drizzly half-day wandering the national mall, touring the Botanical Gardens and the Art Museum, reflecting on the Reflecting Pool, gazing at the Monument. A bit bleary, and a little damp, but definitely worth it. We got to Lima late at night, 24 hours after leaving Seattle, and booked an AirBnB, slept in, toured Lima on foot the next day, enjoyed local food, reckoned with travel lag. The next morning our flight to Chachapoyas was inexplicably delayed and we hung out with fellow travelers at the gate for hours, waiting for explanations, which finally came via a bus that pulled up, loaded us up, took us back to reclaim our bags, and explained that due to weather, the flight had been cancelled. 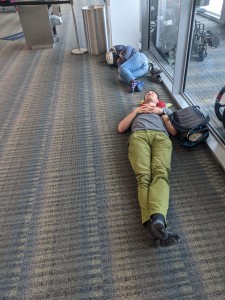 Another day in Lima, another night in an AirBnB, another Uber ride or two, more exploring of a city we’d really rather not be in. None of it compensated for or assisted in by the tiny airline that serviced our destination. Only the next day did we manage to fly out and make it to see Liz, and Ruby, who had actually managed to match her itinerary.

Ten days later, when we returned, our flight back from Chachapoyas to Lima was inexplicably delayed by several hours, but did eventually fly. Another afternoon in Lima with the kids, spent nicely enough, and then back to the airport for flights out. Through baggage claim, through TSA, through Customs, off to our gates. We said goodbye to Ruby and boarded our plane, which then sat at the gate for an extra hour before explaining that a dashboard switch had to be repaired. Fine, we eventually pushed off, only to sit, unmoving on the tarmac for another unexplained hour, before the pilot came on the say that one engine wasn’t firing. We sat for another couple of hours in our uncomfortable seats while they tried to fix the plane, before finally declaring that the flight was cancelled. Off the plane, onto a bus, back to baggage to reclaim our luggage, back through customs, and then into a long, glacial line of disgruntled passengers who proceeded to go up to the desk and plead their particular travel distress to the agent and try to work things out. Several hours later we finally got our hotel and meal vouchers, went to a waiting bus, before taking an interminable route to the hotel where we would have to spend yet another day in Lima before taking the replacement flight back home. All in all, that debacle at the airport lasted from 8:30 at night until 5 am the following morning. 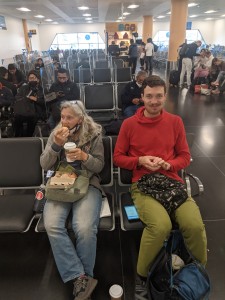 Having fun while anticipating another flight cancellation.

Thankfully, 24-hours later we finally boarded a plane that managed to successfully get airborne and deliver us back to Seattle, where we immediately got into our car and drove back to Montana. Sorry for the long-winded delivery, but you have to admit, that was a shitshow of gigantic proportions.

Air travel is no longer anything but an ordeal to hopefully survive. And hopefully the travel travail is made worth it by the quality of the time in the destination.

Which brings me to conclusion number two (a much more pleasant one!). When traveling to a foreign place, and especially one in which you don’t speak the language, it is an incalculable advantage to have an ambassador in place who can help facilitate your visit. Either that, or book a tour that will take all the logistical challenges off your shoulders. (The tour is a poor second choice to having an ambassador – more money, less freedom, less authentic . . .).

In our case, once we got to Chachapoyas, we were in Lizzie’s hands and our visit proceeded in very rewarding style. Liz speaks the language fluently. She has been in place for the better part of a year and has developed friends, knows out of the way restaurants, has established relationships with vendors at the market, and has explored the region. As such, she was able to put together a string of wonderful days with us, packed with sights and experiences that delivered a true sense of Peru – the people, the customs, the food, the geography. 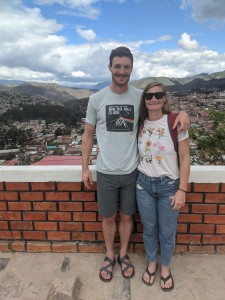 Before our trip, we juggled the decision of whether to try and fabricate our own top ten things to do in Peru – backpacking to Machu Picchu, going to hummingbird hotspots, visiting the Amazon headwaters, traveling to the high peaks of the Andes . . . It was that, or concentrate on the part of Peru where Liz lives and dive more deeply. I’m relieved to say we chose the latter option, and are very grateful to have done so. 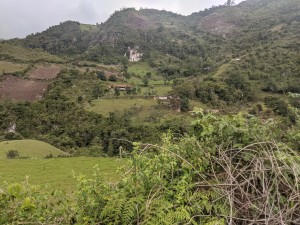 Typical Peruvian valley in the highlands.

With her guidance and in her company, we stayed at sweet, off-the-radar places with home-cooked meals for less than $20/night. We walked trails through jungle vegetation to a stunning series of waterfalls. We sat at a little coffee shop and watched hummingbirds. We walked back roads up panoramic, cliff-walled valleys with flocks of green parrots flying by. We toured local ruins from pre-Inca civilizations. We had a zany day of rafting on a local river, all to ourselves. We got invited to a friend’s house who provided a memorable Peruvian lunch. And we became comfortable in a town, through Liz, where we conversed with local shop owners, wandered the streets, took in local events, watched funeral processions, bird-watched, petted dogs, and enjoyed meals via Liz’s connections and facility with the language. 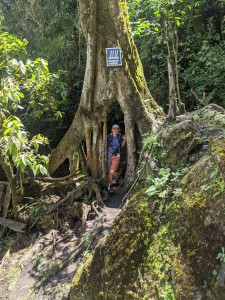 Marypat embraced by a tree on a jungley, waterfall-studded hike.

Our ten days in country, with Liz as our guide and translator, more than made up for the agony of the air travel. Still, I think I’d consider driving all the damn way to Peru next time, just to avoid that shitshow!!! 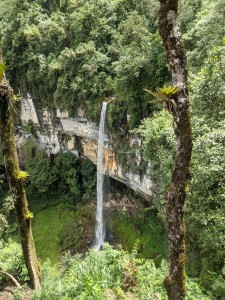 Not on the tourist circuit!