When we moved to Butte, one of my goals was to paddle Silver Bow Creek, the little stream that runs right through town and that has handled more than its share of the mining legacy Butte is so famous for. I had paddled a lower stretch a few years back, but among our first friends in town was Joe Griffin and his partner Sherry Vogel. Joe is a retired hydrologist with deep knowledge of the Superfund issues in town, especially those involving waterways. Months ago I mentioned to Joe that I hoped to paddle Silver Bow, and he was enthusiastically on board.

“I want to start right in town,” he said.

And so, a week or two back, we did just that. We actually began on Blacktail Creek just above the confluence with Silver Bow, and a stone’s throw away from the visitor center off of Montana St. The paddle began by ducking through a large culvert. Then Silver Bow came in from the right, and off we went. Just past the Montana St. bridge, we navigated “Slag Canyon” a narrow channel carved through mine waste. From there the ‘restored’ creek snaked through a tight alley bound by willows. Machetes would have been helpful, and there were some significant body blows as we crashed through the overhanging shrubbery. 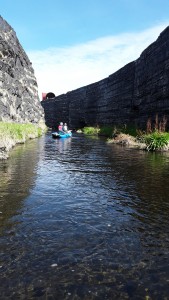 Mind you, we’re talking a whopping 25-30 cfs ripping along through the streambed here. Still, surprisingly challenging as we fought through the shrubbery, rammed over beaver dams, found narrow slots through barriers. Joe knows every stream monitoring site and is an encyclopedic authority on the minutia of restoration, down to whose post and gauge is on every river bend, and what vegetation got planted where and in what year. He was a constant tour guide, pointing out wastewater ponds, settling ponds, fortified banks, monitoring wells, and rattling off historical tidbits and geological nuggets. 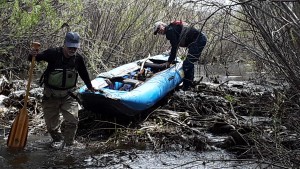 Beaver are clearly relishing the restored creek full of willows.

Part way along we stopped for lunch near the paved walkway that is one of the side benefits of Superfund money. Locals walked by, all of whom Joe and Sherry knew by name. They were polite, but who knows what they thought of our paddling jaunt.

“I’m guessing this stretch doesn’t get many boaters,” I said, at one point.

“We may be the first!” said Joe, with relish.

Several hours and seven and a half winding miles later, we hauled the boats out just past a railroad trestle. One bend upstream, someone’s trampoline had blown into the creek and nearly dammed the flow.

“Checked that box,” I said, as we loaded the car.

“Let me know when you want to do the rest,” said Joe.