Far-flung, epic, road-tested, calamity, hardship, triumph, break-through, satisfaction, disappointment – all of it applies to this summer and its slate of journeys. Of course, it went by in a flash and already we’re back into another school year. Already it seems like a fading memory, but that doesn’t lessen the intensity of the experiences, both for the kids’ expedition and for ours. 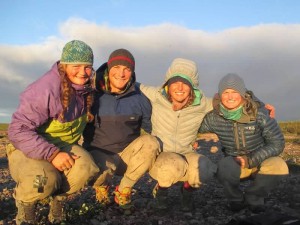 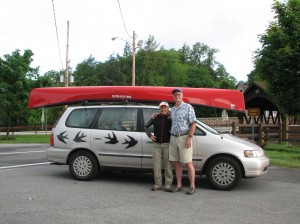 From left to right – Ruby, Sawyer, Kelly and Quinn. And below, the parental unit posed by the venerable Honda Odyssey (333,000 miles and still ticking), adorned with swallow stencils applied 20 minutes before departure – a vintage Marypat touch.

The kids pulled off a truly gargantuan northern expedition from Yellowknife to Baker Lake in the Far North, following a trail across Great Slave Lake, Artillery Lake, the Hanbury River and the Thelon River. Their journey covered 1,000 miles in 41 days, a pretty stout pace, especially considering the conditions.

They ran into persistent ice on Great Slave Lake, which delayed them by nearly a week. The Northwest Territories experienced the worst fire season in history, and they encountered smoke so thick they couldn’t see more than 1/4 mile and several spots of open fire. Headwinds battered them for 15 consecutive days. At one point they considered turning back, given the circumstances, but chose to push on, driving themselves to paddle day or night, whenever windows of opportunity presented themselves.

The pace was exhausting, the conditions daunting, but they managed the expedition in great style, loving the tundra, seeing wildlife from musk ox to grizzly, baking cinnamon rolls, and continuing the family tradition of northern expeditions. As parents, it was a breakthrough moment when we welcomed the crew back home after their first self-reliant deep wilderness expedition. 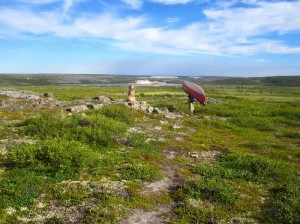 We set off from Old Forge, NY to paddle the Northern Forest Canoe Trail in a beautiful new boat provided by Wenonah (the Spirit II). It was a back-to-the-future feel – back to the way it used to be, when the two of us occupied a boat hull and carried on across miles of watery backcountry, and to a future of trips together again without the kids.

All went well for more than 100 miles. We were cruising, averaging 25 miles a day despite frequent portages, using portage wheels when possible, handling lake crossings, rapids, locks and falls, navigating across “wild” country, New England style, which is a very different wild than the Far North – think ostentatious houses on lakeshores, motors of every stripe, Adirondack chairs on lawns, flags flapping from porches. Still, we were making great time and finding our tandem rhythm. 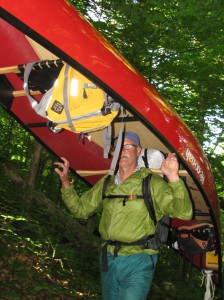 All that came to a screeching halt part way down the Saranac River, when we wrapped that pretty canoe around a rock in a heart-breaking accident. How did it happen? Kind of a long story, but it was a combination of unusual water, a less than complete route description, and some inaccurate expectations on our part.

We ran several sets of Class II-III rapids upstream without problem, carried around Teft Falls, and proceeded down to a set of ledges we hoped to line past. Only the river at that level was unlineable and we were forced to bushwhack a rough portage through nearly a mile of dense woods and swamp to avoid a long section of ledges and heavy water. At the end of that, we assumed we were past the worst of it, and loaded up again. Only the rapids continued, unabated. We ran the lines we wanted but kept taking on water in the drops. Several times we eddied behind boulders to bail and assess, until we went over a bigger drop, took on a big dose of water, and started to wallow. We tried to ferry to shore, but the boat was unwieldy and slow. In a terrible, slow-motion moment, we rode up on a rock and the boat folded into a hairpin around it, leaving us chest-deep in the eddy below.

For the next several hours we set up a handline and ferried everything to shore, including the wrecked craft. No amount of duct tape would fix that canoe. Both gunwales were snapped, there was a 4-foot tear in the hull, and a side-to-side crease folded the boat in half. As I say, heart-breaking. Nothing like that had ever happened to us on a trip. Very emotional, very lonely moment.

We camped there on the riverbank. That night we sat up late in the tent, going over maps, trying to decide on a Plan B. In the morning we bushwhacked with everything through the woods to the nearest road and hitched a ride to a phone. In one very long day full of wonderful people, we were able to get ourselves shuttled back to our Honda and make our way to my sister’s house in western Mass., and her offer of a loaner canoe to pick up our journey.

We decided to rejoin the canoe trail again in northern Maine. A week later, following some wonderful visits with friends and family, we launched again on Flagstaff Lake. For the next three weeks, we paddled the waters of northern Maine – upstream, downstream, connecting drainages, seeing moose, meeting people, navigating epic portages, getting our mojo back in a canoe together. 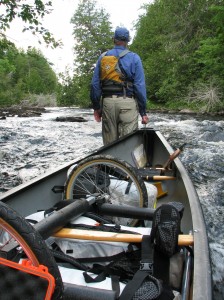 In the end, we spent a month on the waters of northern New England, paddled roughly 350 miles, hiked up to Avery Peak along the Appalachian Trail, navigated the Allagash Waterway, coasted past camps once occupied by Thoreau, to finish up at Ft. Kent, Maine on the St. John River along the border with New Brunswick.

As an unexpected benefit, our changed itinerary allowed us to indulge visits to old friends, college roommates, family, new acquaintances and to take care of our New England visitation obligations for the next decade!

So, not exactly according to plan, but when does life cooperate with our schemes? Back home with more than 6,000 summer miles on the old Honda, rich with family and fueled with a new batch of memories, new country, and plans to come.

This weekend – an overnight paddle on the lower Madison River. Next weekend – Marypat is part of a Dragon Boat crew competing on Flathead Lake. The week after that, two jaunts on the Yellowstone River with out-of-town visitors. Oh yeah, some work in there, some writing deadlines, some house projects . . . Life is good! 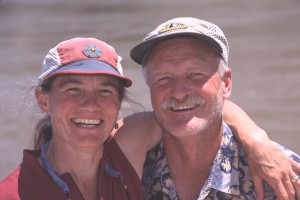